Paying the Checkoff. Collecting the Checkoff. Managing the Checkoff. As a rancher, auction market owner and Kansas Beef Council (KBC) Executive Committee member, Josh Mueller sees his Checkoff dollars, as well as those of his family, neighbors and customers, advance the beef industry at each step along the way. He joined the KBC Executive Comittee more than four years ago and is honored to sit with cattlemen and women from across the state.

Mueller runs a small cow herd and offers custom grazing, custom backgrounding and cattle feeding with his father. He and his wife also own El Dorado Livestock Auction and he's been an order buyer and representative for Superior Livestock Auctions for the past 20 years. Mueller works with multiple segments of the beef industry every day.

His career has afforded Mueller a front-row seat to the progress in the beef community over the last several decades. He started buying cattle in high school, but knew long before his career would be in the cattle industry. “I’ve been in the business for 30 years and you can just see the progress,” Mueller said. “With everything we are involved in, maybe we see it more than others, but I think we’ve made tremendous strides.”

Mueller credits the decades of progress to KBC and the Beef Checkoff. “I strongly believe without the Checkoff, beef producers would be lightyears behind other proteins in market share,” he said. “It has been proven through economic studies the return on investment is as high or higher than any other input on a percentage basis. If you’re open-minded you can just see it: the awareness of beef and how it's used, the research that has been published and the different cuts of meat that have been developed. The Checkoff has created more demand.”

Specifically, KBC recently funded research supporting a campaign with which we are all familiar. “A taste comparison between beef and alternative protein substitutes showed consumers overwhelmingly chose ground beef over plant-based alternatives. K-State published the research results,” Mueller said. “While obvious to many of us, this research will be used in combination with the nutritional information to further solidify beef’s place on healthy plates around the world.”

Mueller welcomes conversations with cattlemen about the role KBC plays. “I like to express to them the power of their dollar and the strategic alliances we have with the Cattleman’s Beef Board and Federation of State Beef Councils as well as partnerships with other states that make our investment go farther,” he said.

More than anything, Mueller is passionate about seeing the beef industry succeed and keeps that at the forefront of all aspects of his job. “It's very important to me that producers realize the KBC board is made up of fellow beef farmers and ranchers just like them, from various industry segments, and what we do affects our operations the same as theirs,” Mueller said. He does not take lightly the responsibility of managing Checkoff dollars. He reiterates the meticulous processes that are in place to ensure the money collected from producers is spent correctly and sensibly.

“Our role at the auction market of both collecting the dollar and then also remitting those funds to KBC is crucial to the system,” Mueller said. “I can put producers' minds at ease knowing not only does their investment make it to its intended place, but also that it is spent wisely with a great deal of thought and purpose.”

Everyone in the beef community has a vital role to play in the Beef Checkoff. Whether it’s paying, collecting or managing dollars, there is a need for people like Mueller who are willing to have the tough conversations, volunteer their time and keep moving their herds and the industry forward. 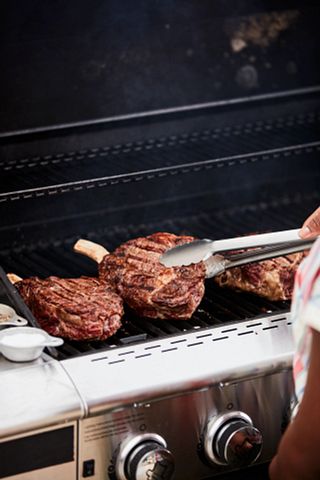